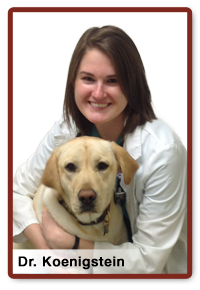 “Trick knees”, more properly termed medial patellar luxations, are a relatively common finding on physical examinations here at OCVH and in most veterinary practices of small breed dogs.  In many cases, it is an incidental finding during a routine exam, while in other cases it is found when a dog comes in for sudden limping.  When found on routine physical exam, veterinarians will mention it as a finding but may not go into much detail since it is not usually a cause for concern. But since it is so common, here is some additional information about the condition and what, if anything should be done about it.

The patella is the fancy name for the knee cap.  It is attached to the tendon of the quadriceps muscle in the front of the thigh and sits in a groove of the femur (thigh bon 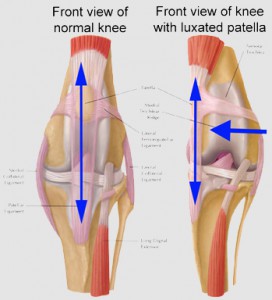 e). The function of the patella is to act like a pulley and to facilitate the bending actions (flexing and extending) of the knee.  The term “patellar luxation” means that the knee cap has slipped out of its normal position within the groove of the femur, most often toward opposite leg (medially).  Sometimes it may slip toward the outward direction, which would be called lateral patellar luxation, but this is much less common.  While patellar luxation can be seen in any breed, smaller breed dogs are much more prone to it.  About 50% of affected dogs have the abnormality in both knees.

Medial patellar luxation (MPL) is most often due to a congenital (inherited) abnormality and is usually present from a young age.  The groove in which it resides may be too shallow or an abnormal rotation of the shin bone may cause the attachment of the tendon to be more to the side.  In either case, the patella is tends to pop out of place with normal motion of the leg. Trauma or injury can also cause luxation but this is relatively rare.

In most cases, there is no obvious sign to the owner that a pet has this condition.  Some owners will note that the pet will occasionally hop or skip on one leg when running and then return to normal without ever acting painful, indicating that the patella has shifted out of groove but then popped back into place.  Some dogs may become lame during exercise if the patella shifts and does not return to normal position, causing discomfort and inflammation. Long term effects of frequent displacements can lead to arthritis in some pets and may make them more prone to injury of ligaments in the knee.

Patellar luxation is graded on a scale of 1 to 4, with higher numbers indicating more severe luxation.

–Grade I – Patella can be manually moved out of groove during examination but immediately returns to normal position.   These dogs are unlikely to show lameness.

–Grade II – Patella is able to be easily manipulated out of place but does not return to correct location once pressure removed.  These cases are more likely to show mild signs of lameness.

–Grade III – Patella is always luxated, can be slipped back into place but immediately re-luxates.  These dogs show more persistent lameness.

–Grade IV – Patella always out of groove and cannot be put back in place.  These dogs will have significant lameness and cannot straighten knee. They may have bow-legged appearance.

MPL can be easily diagnosed on routine orthopedic examination.  Radiographs or other imaging modalities may be needed to determine the extent of abnormalities (structural deformities, depth of femoral groove, etc).

Those pets with Grade I or II luxation that rarely or never show any clinical signs are unlikely to need surgical treatment.  For those with Grade II or greater that show more persistent lameness, surgery can help to correct the underlying abnormalities.  If both legs are equally affected, most surgeons recommend correcting one leg at a time and allowing time for the first to heal prior to correcting the second (at least 8 weeks).  The exception to this may be a dog that is still growing as correcting one at a time may lead to conformation changes if the bones are still growing. 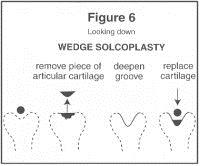 Trochlear Modification – this surgical correction is meant for those small breed dogs with a shallow groove.  The goal is to deepen the groove by removing some of the bone below the cartilage, then replacing the cartilage to keep the smooth surface. 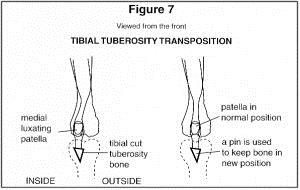 change the alignment of where the patellar tendon attaches to the top of the tibia (shin bone) to prevent the patella from being pulled to the side.  The tibial tuberosity (crest where the ligament attaches) is removed and pinned in a different location to adjust the pull on the patella.  In some severe cases, the entire bone must be cut and realigned.

In simple cases of trochlear modification, 3-4 weeks of rest is sufficient for recovery.  With more complicated surgery, a longer period of confinement, possibly up to 8 weeks or more, may be recommended.  Some of these dogs also benefit from physical therapy. 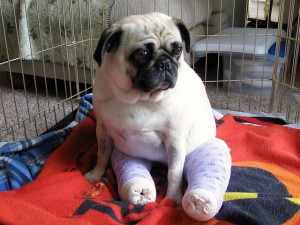 If you suspect your dog may have patellar luxation or another orthopedic problem please contact one of our veterinarians or schedule an examination.