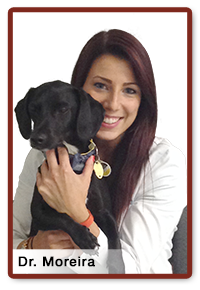 ard to believe, but summer is already over, and the holidays are right around the corner.  Of course, with Halloween and other holidays soon to follow, baking and gift giving season has begun. As one of the most beloved desserts and snack foods in the world, chocolate is sure to abound in every household.  But this treat, delicious as it may be, can be extremely harmful to our adored pets.  Even though it is a well -known fact for some of us, we may still sneak an Oreo or two to our dogs and cats and maybe even some Hershey’s chocolate.  How can they be denied the satisfaction of such tasty treat? While there are not always toxic effects associated with the ingestion of very small amounts of chocolate, a tasty treat could turn into a real Halloween nightmare!

What part of chocolate makes it harmful for some animals?

Many dogs have indiscriminate eating behaviors. (I’m sure many of you have a dog that has eaten a sock or two in the past!) Because of this common trait, chocolate toxicity generally occurs more frequently in dogs than in cats. The chemical that causes all of the problems in dogs is called methylxanthine. Some types and brands of chocolate contain m 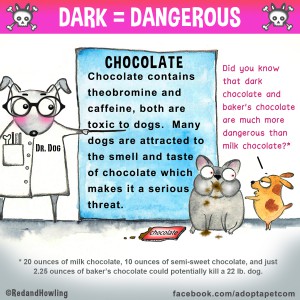 ore of this chemical than others. For example, baker’s chocolate has extremely high amounts and is very dangerous compared to most inexpensive candy bars. In animals, this chemical causes extreme stimulation of the nervous system, increased urination and dangerous effects on the heart. It can cause arrhythmias, or disturbances to the normal rate and rhythm of the heart that may be life threatening. The increased stimulation of the nervous system puts dogs at risk for seizures.

What are the signs of chocolate toxicity in dogs? 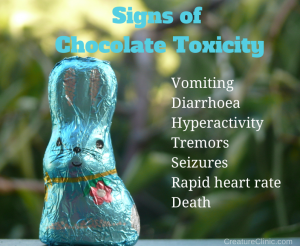 If you suspect that your dog has ingested any chocolate, it is recommended that you contact a veterinarian for further advice. Signs of chocolate toxicity include vomiting, hyperactivity, restlessness, high heart rate, and high respiratory rate. Some dogs may even develop pancreatitis, which is an inflammation of the pancreas, several days after ingestion of chocolate, even if they have undergone treatment. Clinical signs of pancreatitis include abdominal pain, vomiting and diarrhea. Depending on the severity of the reaction, dogs with pancreatitis may require hospitalization because it too can be life threatening.

How is chocolate ingestion and toxicity treated?

It depends on what signs your dog is showing and how much chocolate your dog consumed. Methylxanthine is specifically found in cocoa so generally speaking, the higher percent cocoa in the chocolate, the higher concentration of methylxanthine it contains. If your dog is brought to see a veterinarian within a short period of time of the ingestion, the doctor may elect to induce vomiting in your pet.  Depending on the circumstances, treatment can range from monitoring your pet at home to having your pet hospitalized in the ICU and on IV fluids and medications. While hospitalized, your pet’s heart rhythm can be monitored for life threatening arrhythmias and for seizure activity. If there is any question that your pet consumed chocolate, please contact your veterinarian right away.

How do I prevent chocolate toxicity?

Of course, the first preventative step is to lock away the chocolate-containing candy! Due to their great sense of smell, dogs can sniff out tasty treats, making them susceptible to ingestion and toxicity so be sure it is well out of reach or in a cabinet that can’t be opened easily.

Other household products do contain methylxanthine and may cause the same serious reactions in your pets. These include: diet pills, fatigue reduction pills, tea leaves, coffee products, and colas. If in doubt call your veterinarian!

In addition, please keep in mind that some “sugar free” chocolates and candies do have another chemical compound called xylitol, which is EXTREMELY toxic to pets. Xylitol is most commonly found in sugar-free products and leads to hypoglycemia (low blood sugar).  Xylitol is quickly absorbed once ingested and can cause signs within an hour or sooner.   Pets that have ingested the chemical typically require hospitalization. 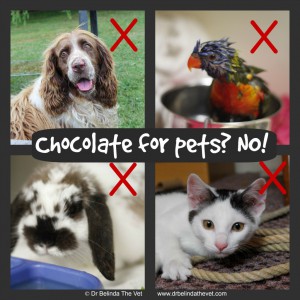 We at OCVH, FVH, and NPVH are always available to help you with any concerns you may have with regard to your pet’s health. Never hesitate to contact us with your questions! 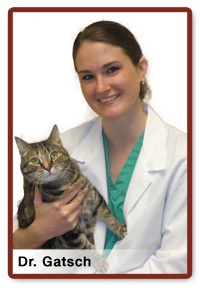 Lilies can be fatal in your cat 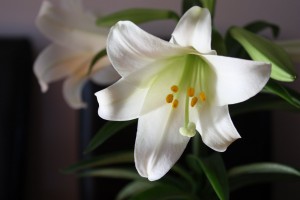 Beautiful flower, right?  But did you know this pretty and seemingly harmless plant could actually kill your feline companions with a single nibble?  It’s true!  Certain types of lilies are among the most dangerous types of flowers for felines, and far too people are aware of this until it may be too late.  With Spring slowly starting to make its reappearance and stores full of flowers waiting to make their way into your home, we need to take a moment to discuss this potentially deadly toxicity.

The types of lilies that you need to worry about include:

The toxic compound in lilies is extremely destructive to a cat’s kidneys.  It only takes a nibble on a single leaf or stem, drinking the vase water, or ingesting a small amount of pollen from these flowers (as with grooming) to send your cat into acute (sudden and often irreversible) kidney failure and have you rushing them to the nearest emergency room. 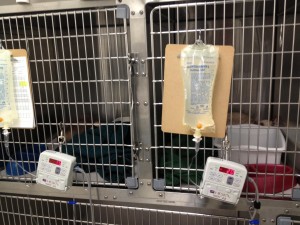 Treatment for lily-induced acute kidney failure involves aggressive IV fluid diuresis, injectable medications, nutritional support, and very close monitoring.  If these fail, advanced procedures could be attempted, such as different types of dialysis, however these are quite expensive and are not readily available even at most specialty veterinary hospitals.

Hopefully it is clear based on all of this information that the best thing you can do is to PREVENT their exposure to lilies.  Here are some suggestions for doing this.

Hopefully this entry has helped provide some information to you regarding a dangerous toxicity we see far too often.  Happy Spring! 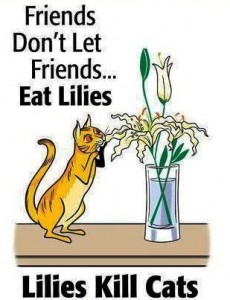 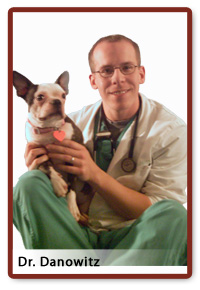 I want to share with you the story of Chloe, a 2 year-old, spayed, female Swiss Mountain Dog, who was rather mischievous one afternoon while her owners were out of the house. 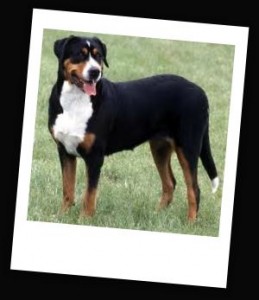 Chloe’s owners had left for the afternoon, and she was allowed to roam the lower level of the house (as is usual for her). On this particular day Chloe went “counter-surfing” and was able to locate a large pack of Ice Breakers gum pushed to the back of the countertop. With her long reach she was able to capture the pack of gum, and ingested all the pieces (including wrappers!).

When Chloe’s family arrived home several hours later they were alarmed to find that their 109-pound family member could not walk straight, almost as if intoxicated. Panicked, they searched the house for any toxic chemicals that Chloe could have gotten access to, but found only the outer wrapper to the aforementioned pack of Ice Breakers gum. They called Ocean County Veterinary Hospital (OCVH) , and we immediately advised bringing Chloe down right away, as this emergency can become a life-threatening situation.

Some flavors of Ice Breakers Gum (along with many other brands of sugar-free gum) contain the artificial sweetener, Xylitol. Xylitol is used worldwide, mainly as a sweetener in chewing gums and pastilles, but is also found in pharmaceuticals and mouthwash. The fluoride supplement that my children take each day contains Xylitol as a flavoring agent. In human literature, Xylitol is praised for being a “dental-friendly” sugar substitute, and is a far superior option for diabetic people than table sugar. Although very safe for humans, Xylitol is extremely toxic to dogs.

Dogs that ingest products containing Xylitol can show signs of toxicity within 30 minutes. Once ingested Xylitol causes a rapid release of the hormone insulin, which can produce to the following clinical signs:

● and, if a large enough amount is consumed, and untreated, death

Dogs that present to our hospital with Xylitol ingestion / toxicity are treated as very serious, life-threatening emergencies. If the ingestion was thought to have been within 2 hours, vomiting can be induced to remove any yet-undigested material. As with many poisonous substances, inducing vomiting before complete digestion has occurred greatly increases the chances for a dog’s survival. Therefore, going to the veterinarian as soon as possible after suspected ingestion of any toxic substance is very important! If more of the Xylitol-containing product is suspected to be further along in the digestive tract of the dog then a product called activated charcoal (or Toxiban) is sometimes administered. Activated charcoal is a thick, black tarry substance that when ingested coats the stomach and intestines, effectively blocking any further absorption of the toxic material (in this case Xylitol) into the bloodstream.

Now getting a dog to EAT activated charcoal can be a very tricky, and very messy, process – as any veterinary technician will tell you! Frequently, the use of a stomach tube is required.

Any dog that is suspected to have ingested Xylitol must have their blood sugar (glucose) level checked immediately upon admission to the hospital. If hypoglycemia (low blood sugar) is present, treatment is immediately initiated to raise the blood sugar with intravenous and oral medications in order to avoid the toxic symptoms listed above. Depending on the amount of Xylitol ingested, when it was ingested, and the success of clearing the digestive track after inducing vomiting and / or using activated charcoal, some dogs require referral to a 24-hour care facility to receive treatment for hypoglycemia for an additional 24-48 hours.

The second dangerous effect of Xylitol toxicity in dogs is a delayed liver failure. Sometimes liver values in a dog’s blood work do not start to rise until days after the Xylitol ingestion, so daily monitoring of a dogs blood work for 3-14 days may be recommended by the veterinarian.

Back to Chloe, our 109-pound Swiss Mountain Dog: Chloe’s blood sugar was already dangerously low at the time of admission to our hospital, and treatment to raise the blood sugar was started immediately. Activated charcoal was administered to her. After she was stabilized, Chloe was referred to a specialty hospital in our area where she remained for 3 days, to monitor and control her blood sugar. Even after discharge from the hospital, Chloe returned to our hospital twice over the next 2 weeks to recheck her liver values. I am happy to report that she has achieved a full recovery and is back to her normal self! Chloe is grateful that her owners were observant and acted so quickly when they discovered she was not feeling well. 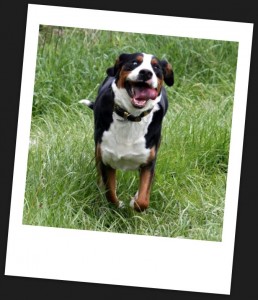 Most people know about many of things that are toxic to dogs, including chocolate, grapes, raisins and onions… but so many people are unaware of the dangers that sugar-free gums containing Xylitol present to their dogs. How many of you have a pack of gum in a purse or on a counter in your house?